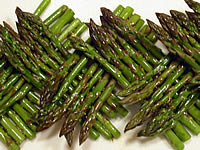 Asparagus can be green or white, depending on whether grown on or above the earth.In 瞭解更多資訊

Another important step of extroversion was made for the Greek kiwi this period. Under the Community co-funded export promotion program «Premium European Kiwi», the Greek kiwi tested its export strengths in one of the biggest food fairs in the world, the Asia Fruit Logistica. Hundreds of visitors of the exhibition tested the Greek kiwis, which attempted  to strengthen their brand, expand their horizons and their extroversion.
The stand of «Premium European Kiwi» received positive feedback from visitors of the exhibition, making an energetic start in the promising Chinese market. The Greek kiwi is considered as a 瞭解更多資訊

The Kavala kiwi exported to France, Great Britain, Germany, (while large amounts were channeled to Syria before the war and Russia before the embargo). Kiwifruit from the municipal area of Nestos ‘built’ alread high reputation for decades throughout Europe, but now entrepreneurs and producers opened the way for new partnerships.
In the context of implementation of the three year program Premium European Kiwi, the start was made with Canada, two weeks ago followed by 瞭解更多資訊

Brand extroversion in key markets such as China, the United Arab Emirates and Canada, is “buildt” by the Greek kiwi. Four Greek businesses opened this year on the Canadian market, starting in Montreal and the first orders have already been made and the missions are to be imminent. The Greek companies will test then their export forces in Shanghai and Hong Kong, by approaching the promising public of China. Next stop is the Dubai and Abu Dhabi, where the Greek kiwi will attempt to open export horizons in highly dynamic UAE market.

The Agricultural Cooperatives NESPAR and NESTOS and Alcyone AE 瞭解更多資訊